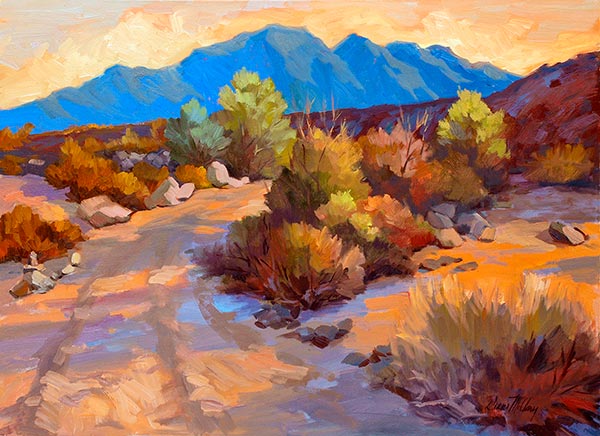 As an artist, I am totally grateful for the knowledge that I received from studying with Sergei Bongart, along with my studies with Ron Lukas, Sunny Apinchapong, and Del Gish. Also, I feel very fortunate that Mary Balcomb wrote an intensive and comprehensive book, Sergei Bongart, on the life and teachings of Sergei.

I believe that there are very few artists that have ever been as vibrant as Sergei was in his art. Not only in his own painting, but in his teaching and the inspiration that he gave to other artists. In my tale, I will try to relate as closely as possible how I came to know Sergei and was so influenced by him.

With each demonstration, Sergei would exhibit tremendous excitement as he painted. He would first briefly describe the steps that he would follow, and then would proceed to produce a beautiful painting — totally completed in less than three hours.

Often, he would explain the importance of always comparing and relating colors. He would say, “Many artists simply copy colors by filling in the spaces like coloring in a color book. When you paint, look at all the colors, compare them and paint the differences. Ask, what is warmer? What is cooler?” This is when I first began to realize how to use color temperature by observing and comparing warm and cool colors.

At one of his first demonstrations that I saw, Sergei was painting a still life with roses, fruit, and various pots. There was a spotlight on the still life that revealed a strong light on the objects as well as a shadow pattern. When I watched him paint, from large abstract objects, to more finished, and then final details, I felt I had just experienced something I had never seen before in an artist completing a beautiful painting with so much confidence in less than three hours.
At this demo, there were approximately 100 artists and friends in attendance. It was held at the Bellevue Community College that was followed with a 3-week workshop organized by Lois McFarland. This was a special demo, as the proceeds were given to help Sunny Apinchapong, who was hospitalized in Los Angeles with a rare form of TB that caused a disease of the brain.  Other artists also donated paintings to be auctioned that were added to the fund.

I was fortunate to enroll in the workshop and therefore given the opportunity to learn and observe Sergei closely with a small group of students. In comparison, there were 20 students in this workshop as compared to his Idaho workshops that sometimes had up to 90 in attendance. 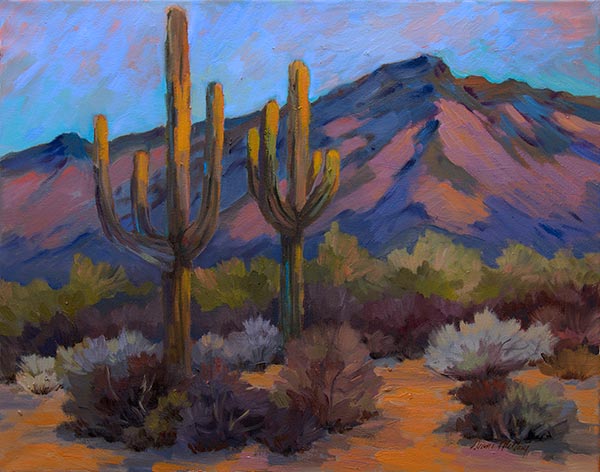 Sergei carefully explained the basic three steps that he followed in his painting:
1.) First paint large abstract shapes, consisting of values that are related and color temperature that is also related. The painting does not continue until this foundation is established and working in color harmony.

2.) Give form to shapes through modeling by adding more strokes of value and color temperature.

3.) Finally, complete the painting with small, carefully applied strokes to serve as the finishing details.

He would joke the importance of these steps saying “Some people paint the fleas before the dog; the dog comes first.”

In item 1) Sergei stressed the importance of first having abstract patterns working in harmony, no matter how long it would take. There was a humorous story that Ron Lukas told about how day-after-day in Idaho, when Sergei was painting a bouquet of lilacs backlit in the window, both artists had to keep replacing the bouquet as it faded, until Sergei had accomplished the exact color harmony he wanted.

Then ask, comparing all the values, “What value — light, medium, or dark? Is the color in the shadow or light? Also start the painting with the darkest colors first, finished with lightest.”
Ask “What color temperature? For example, a warm red would be orange-red, a cool red would be a purple-red. Don’t hesitate to exaggerate colors. The colors should ring like a bell, not like pounding your fist into a pillow.” He would demonstrate this with his hand pretending to hit the pillow with no sound.

As I attended Sergei’s workshops. I learned how to follow these steps and incorporate them into my own painting. I began to have a feeling of confidence that I could now learn to be an “artist.” 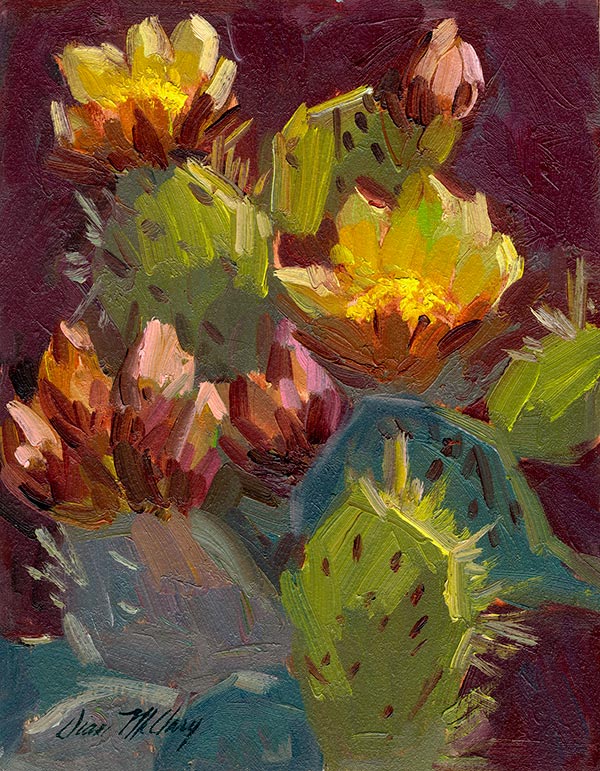 Previous to my workshop with Sergei, I had studied with Ron Lukas and continued to listen to his advice in working in black-and-white studies, drawing still lifes and casts for approximately two years.

When I was in my first workshop with Sergei at the Bellevue Community College, he asked me, “Where did you learn to paint?” I felt a little intimated and told him I been studying with Ron Lukas. When Sergei stopped by my canvases, he was willing to spend time with me. I believe that perhaps he recognized me as a student who really wanted to learn. Sergei felt very strongly about learning the fundamentals of drawing and value studies.

Sergei once mentioned that artists who he especially admired for their color were Andrew Wyeth, Pierre Bonnard, and Edouard Vuillard. Once someone asked him, “What is the best book to read?” With a smile on his face he answered, “The Bible.” While critiquing a painting, he once remarked, “The painting is technically all wrong but it has feeling. Feeling in an artist’s painting is most important.”

After Sergei’s death, my husband and I purchased five acres in Blewitt Pass in Eastern Washington, where we could offer an opportunity for artists to study outdoors, similar to Sergei’s workshops in Idaho.

We had a large barn built where students could paint still lifes and models, and where visiting artists could demonstrate. There was a stream on the property and large shady cottonwood trees where we painted models outdoors, along with many still life set-ups. True to Sergei’s teaching, we would paint the models outdoors with natural light. The property with the stream and cottonwood trees gave the artists many opportunities to paint plein air landscapes. During the ten years we owned the property, other scholarship artists of Sergei would visit and conduct week-long painting workshops. Ron Lukas, Sunny Apinchapong, Delbert Gish, and Deanne Lemley all taught on the property. Students learned how to observe and paint light in the true Impressionist manner. 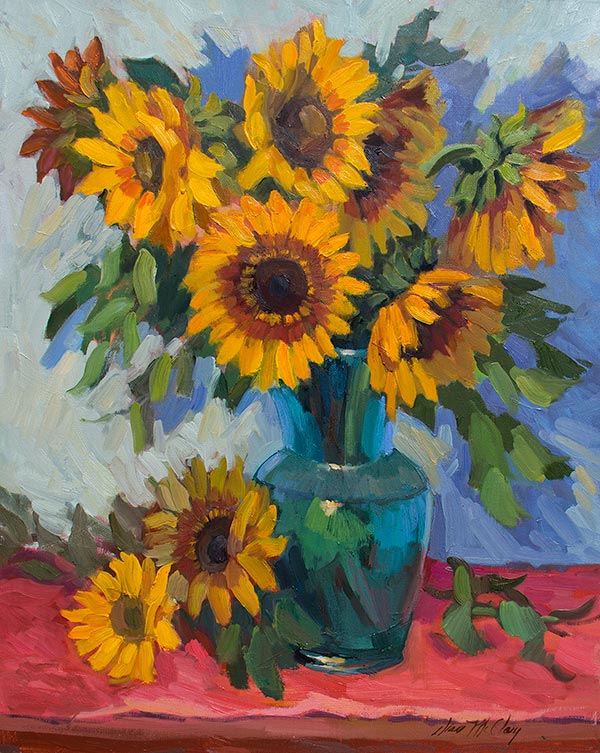 We shared a lot of good times there and really learned a lot from studying with these talented artists. During one of the workshops, Mary Balcomb contacted me to arrange a visit with Del Gish. I believe that this visit was the beginning of her plan to gather information by interviewing artists who had worked with Sergei. She shared with me that at one of Sergei’s demos at the Bellevue Community College, he had said to her, “I would be very pleased if someone was to write a book on me, and I would want it to be you.” She said that at that time he planted the idea for her to write a book on him, but it was not until after his death that I believe she seriously started gathering material for the book.

As Mary began writing the book and gathering information and anecdotes from all the artists who had known Sergei, my friendship with her grew. The writing of the book was very complicated and difficult. At one time, she was even threatened that she could not legally be doing such a task because someone else was already planning to write a book on Sergei. But Mary was very determined to carry on what she had already started. While she was writing the book and continually gathering extensive information from interviews with artists who had known Sergei, she developed diverticulitis and shingles. I believe that partly was due to the strain and stress that was put on her. When I had telephone conversations with Mary, I would try to encourage her to feel less stressed.

But thank God, she was able to pursue with the encouragement from Sam, her husband, and her children, Amis and Stuart. After what I believe was a decade or more of work, she completed the book on Sergei and it was finally published in 2000.

From Mary’s mailing list we were able to invite many of her friends and fellow artists to share in the celebration of the book’s release. Many of the local artists in the Pacific Northwest who had Sergei’s paintings in their collections brought the paintings to hang a Bongart show in our home. William Reese was also there in attendance, to share the accomplishment of the Sergei book completed and now on the market for sale. Everyone was thrilled for Mary. This day was followed by another reception introducing the book at the Frye Art Museum in Seattle.

My friendship with Mary continued from that time on. She would always encourage me as I completed a new painting, and she would visit receptions that I held at my studio. She asked for, and received two of my paintings – and offered two of her etchings in trade. My paintings, I remember, were a lavender flower scene painted in a valley, and a plein air snow scene painted at our home. These paintings were then hung in her living room. [Please forgive the surface reflection!]

I can truly say that I have two passions — one is painting and the other, teaching. About three years ago, students were inquiring if I had ever considered making DVD’s of my teaching. A student of mine, Nila Hagood, volunteered to record and produce DVD’s in trade for painting lessons, and we now have a selection of nine, some of which you see below. 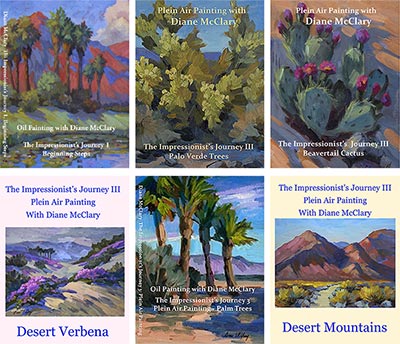 Our next one will be “Plein Air Painting the Joshua Trees.” The DVD’s have been very popular in giving artists an opportunity to fully learn and understand the incredible art that Sergei Bogart’s legacy gave us.

I feel very blessed and fortunate that I am able to share my paintings and also the inspiration that I received from all the artists that knew and studied with Sergei.

I hope that when this is read by those who knew Sergei many memories will be recalled to them. I also believe that my tale of Sergei can be an inspiration to people that did not have the opportunity to know him and also encourage them to obtain Mary Balcomb’s book on Sergei, which is an incredible story of a very important Master Artist’s journey.

Please visit DianeMcClary.com to learn more about her paintings and DVD’s.